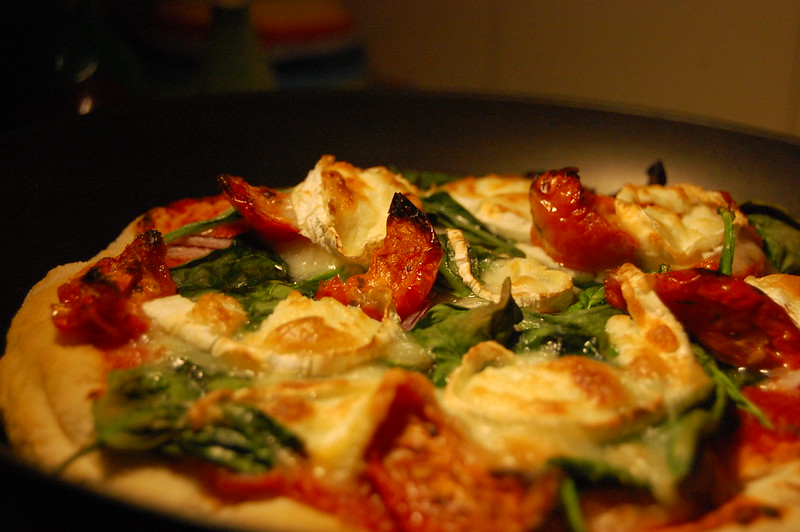 There’s nothing quite like pizza on a Friday night (maybe pizza on any other night...), and this week was no exception. Whether it’s a spicy meat feast or a vegetarian special, few things can beat it. We’ve recently discovered a new method for cooking pizza (taken from Franco Manca’s Artesian Pizza book) which has taken our pizza making to a whole new level! We’ve explained our approach to a few people now, which is often met with rather bemused looks but would urge you to try it for yourselves.

First things first, the pizza base. We make our own and leave to prove for at least 4 hours, although preferably more like 24 hours. We are not entirely sure of the science behind this, but Franco Manca recommend it, and it seems to give a really good texture to the base, although it does require a little extra planning. For the two of us, we usually use about 200g strong bread flour mixed with 5-7g dried yeast, a pinch each of salt and sugar, and then enough warm water to make a not-too-sticky dough. Knead this for 5 minutes until the dough is springy to the touch then cover and leave to prove for however long you have.

Nearer dinner time, start your tomato sauce. We keep this pretty basic. One tin of tomatoes (we prefer the whole variety, not pre-chopped) and some garlic, simmered for a while (this tends to vary with the amount of time available) with some tomato puree and salt if necessary.

Now, for the assembly – this is where the magic happens! Heat a heavy-based frying pan until it’s hot. Franco Manca recommend an iron-based one, we don’t have one of those so just use a reasonably serious, non-stick frying pan. Stretch out your dough to fit the pan then toss it in. That’s right, fry the pizza base! It sounds crazy, but it works. Once the base has begun to crisp underneath (it will still be doughy on top) add your toppings. Leave to cook for a few minutes on the hob, then place under a pre-heated grill to finish off.

Our next step will be to try to make our own mozzarella. Some Google-ing suggests this is possible but we are still trying to track down the requisite ingredients... We’ll keep you posted on that one.