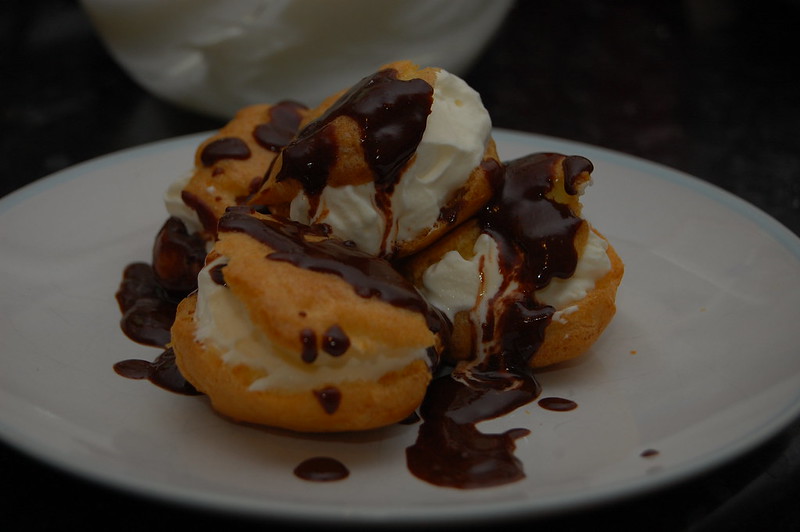 Pudding this Sunday was profiteroles; a surprisingly quick and easy dessert. We use the Delia recipe (with a few swaps, obviously). Melt 50g block fat (we usually Stork or Sainsbury’s ‘baking block’) with 150ml cold water, but don’t let it boil. Quickly stir in 60g strong plain flour and beat until it forms a thick paste - this can take a few minutes. Leave this paste to cool for around 10 minutes. Once cooler, gradually mix in two beaten eggs.

Next, prepare a few baking trays but sprinkling cold water on some baking parchment to cover the trays. Spoon the mixture onto the trays. It’s supposed to make about 30 choux buns, we never quite manage that many. Don't make them too big though as they don’t always rise so well. Place in an oven preheated to 200C for 10 minutes, before turning up to 220C for a further 15 minutes. Take the buns out of the oven and pierce with a skewer or knife to release the steam and stop them going soggy. Put back in the oven for a few minutes.

Now comes the fun bit! Whip up some Lactofree cream (usually a whole carton, we like cream!). Either pipe into the buns using the holes you made to release the steam or slice in half and use the cream to sandwich the two halves together. Then drizzle in chocolate sauce. We make our sauce using dark chocolate, Vitalite, golden syrup, and a splash of soya or Lactofree milk. Scrumptious but impossible to eat elegantly!