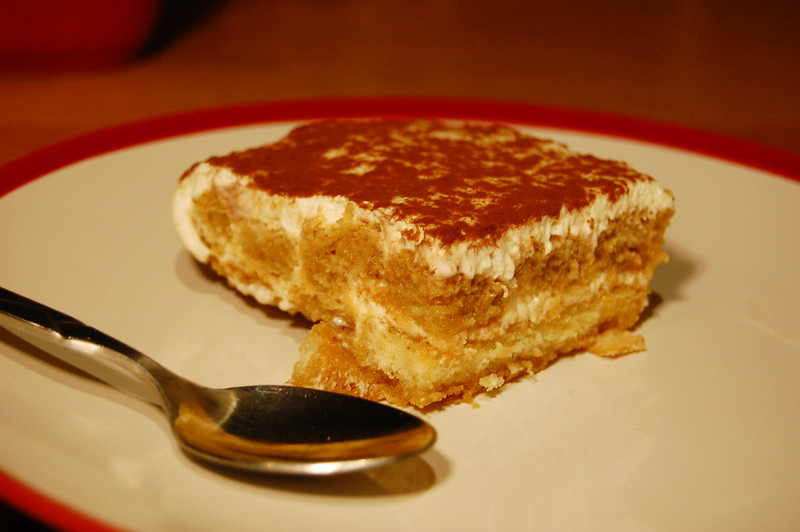 Now here's a recipe that took a few tries to get right but is wonderfully simple now we've cracked it! Tiramisu - the Italian pick-me-up - a combination of coffee and alcohol, the perfect after-dinner treat. We've used a Nigella recipe as our basis but have made a few tweaks. This recipe will serve 4-6 people depending on how generous/hungry you are feeling, but can easily be doubled.

First, make some strong coffee. We used a cafetiere but a stronger brew than normal. You'll need about 100ml of this. Mix this together with 50ml Marsala (we used a medium sweet) and a splash of dark rum (not strictly necessary, but we had some in the cupboard). This is what you'll use to dip the sponge fingers into. You'll need just under a 175g packet for this recipe, although the exact amount will vary depending on the size of dish you use. We used Sainsbury's sponge fingers (although there's nothing to stop you making your own), which are Hannah friendly. We haven't done extensive testing of other brands though, so check the packets!

For the custard, separate one egg. Whisk the yolk together with 35g caster sugar until pale, thick and creamy then throw in another splash of Marsala and 200g Lactofree cream cheese and beat into a mousse-like mixture. Whisk the egg white until fairly thick then fold half of it into the egg yolk mixture (the other half isn't needed, but it's easier to only use half once it's whisked).

Now to construct your tiramisu. Soak the sponge fingers in the Marsala/coffee mixtuer for a few seconds on each side then cover the base of your dish with a layer of soaked biscuits. Pour over half of the cream cheese mixture. Then add another layer of soaked biscuits and top with the remaining cream cheese mixture. Leave in the fridge to settle overnight. Before serving, sprinkle with cocoa powder and there you go!