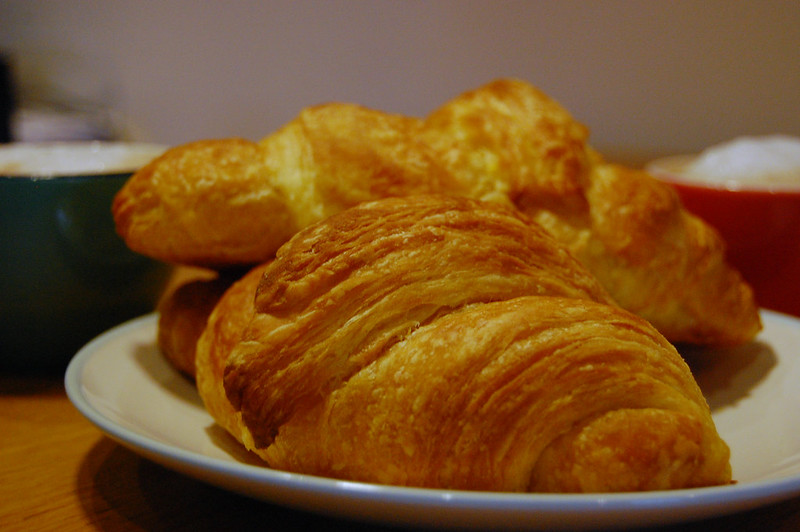 Now, this took a few attempts but we're now pretty confident we've cracked Hannah-friendly croissant. Lots of recipes tell you it's all in the rolling and the folding. This is true but we've found that allowing plenty of time for the dough to prove is critical. While making croissants does take some time, the good news is this recipe should make 10-12 croissants but you can freeze them once shaped and then cook them straight from frozen.

Flatten a block of baking fat (we use Sainsbury's or Lidl own-brand, occassionally Stork if we can't get the others). Roll out the dough into a rectangle, place the butter into the centre and fold the dough over it. Chill for 30 minutes to an hour.

Next roll the dough out and fold again, placing the right third ot the centre then the left third. Chill for 30 minutes to an hour again. Repeat this as many times as you can before going to bed.

Leave the dough to prove overnight in the fridge, we would recommend at least 15 hours and anything up to about 36. 24 is about optimum though.

Take the dough out of the fridge and roll out. Fold into thirds and roll out a few more times. Cut the dough into triangles (between 10 and 12, depending on the size of croissant you want), we prefer isosceles triangles here to right-angle triangles as it makes a nicer shape when it comes to rolling. For each croissant, holding the longest edge roll towards you and curve into a crescent shape. You can also make chocolate croissant by placing chocolate chunks along the longest edge before rolling up. One final prove (about an hour, until doubled in size) and then you're ready to cook.

Glaze the oven-ready croissants using Lactofree milk or egg. Cook at 190C for 10 minutes before reducing the temperature to 170C for another 15 minutes. Alternatively, put in the freezer until you are ready to eat then pop into the oven from frozen (allowing slightly longer to cook, about 35 minutes in total).