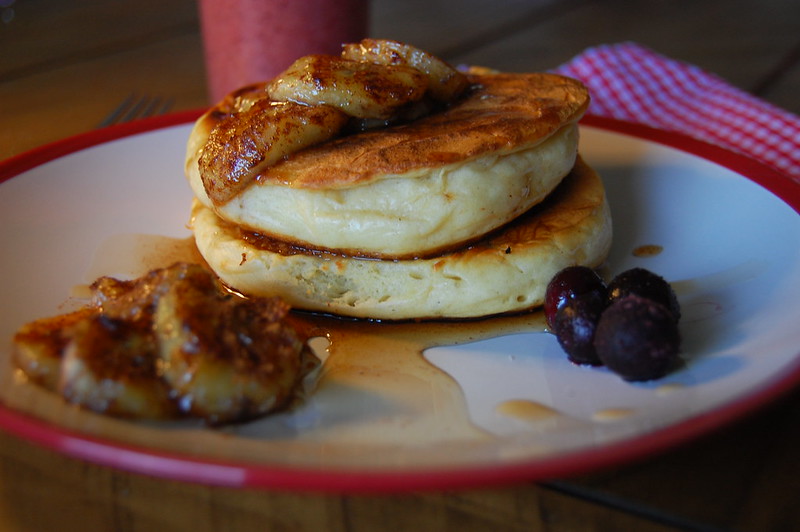 There's nothing like the satisfaction of a well-earned day off, and we're convinced that the breakfast you have on that day is even tastier than on other days. Just to make sure that's true, we put some extra effort into our breakfast this morning (it is the most important meal of the day afterall) as we come to the end of a five-day weekend!

Today it's pancakes - big, fluffy (not to mention lactose free) American pancakes. These are so easy to whip up there's really no excuse not to. This recipe makes enough for 4 pancakes which is just enough for two people but easily doubled if you're feeling hungry or feeding a crowd. We served with bananas gently fried in butter sprinkled with cinnamon and doused with maple syrup at the last moment.

For the pancakes you'll need 100g self-raising flour, 1 teaspoon baking powder, one egg, and 100ml Lactofree milk. Beat all the ingredients together for a couple of minutes (we usually do this in a jug so it's a bit faster and less messy but a bowl works too). Heat a large frying pan with a splash of vegetable oil (or butter if you're feeling extravagant), then spoon in the pancake batter in four even scoops (you may need more than one batch depending on the size of frying pan), make sure the pancakes aren't touching as they will expand slightly. The trick to these pancakes is slow and steady cooking, so keep the heat low! Cook the pancakes for 4-5 minutes until bubbles start forming and popping on top then gently turn them over and cook for another 3-4 minutes, with the heat still very low.

While the pancakes are cooking, melt some butter or margarine in a separate, small frying pan. Gently add in one chopped banana and sprinkle with cinnamon, fry on a low heat for about a minute then gently turn and sprinkle with more cinnamon. When the bananas are ready to serve drizzle with a couple of teaspoons of maple syrup.

Pile up your pancakes, spread with a little (lactose free) butter and then pour over your maple-cinnamon bananas. We serve with a strawberry and blueberry smoothie just to feel extra smug!