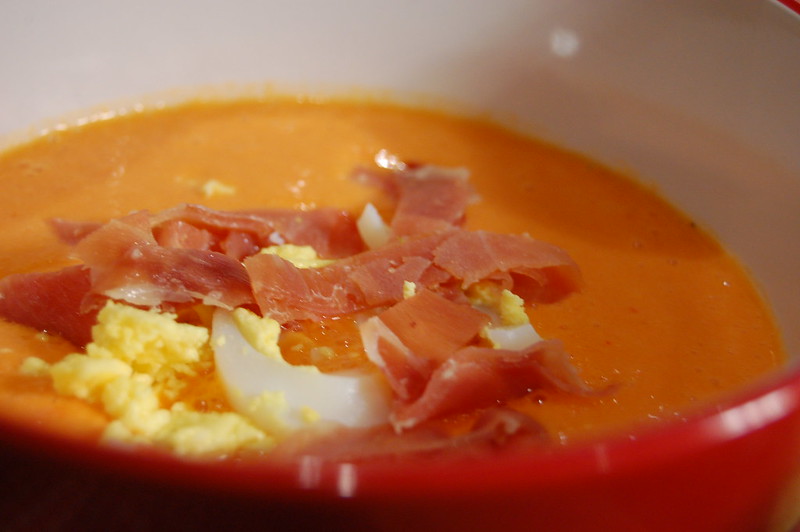 So we're recently back from Spain, a country of great food and fabulous wine. Our latest travels took us to the south of Spain where it's currently super hot. We like to try out new foods on holiday, especially local delicacies, and this is a special one. Salmorejo Cordobes is a thick, creamy tomato soup served cold - a bit like gazpacho, originally from Cordoba but eaten throughout Spain. It's a wonderfully refreshing treat that we had to recreate as soon as we got home. We've tried this out a few times already - it's so good and incredibly simple to make!

Take 600g fresh tomatoes, vine tomatoes or similar are best, slice in half and remove the seeds saving as much liquid from them as possible. The purists say you should peel the tomatoes before using but we don't think this is necessary and it's a lot of effort from little improvement in the final product. Place the tomatoes into a liquidiser. Add 65g slightly stale bread to the blender, just the insides though not the crusts. In addition, add in 2 small or 1 large clove of garlic, 1 tbsp red wine vinegar, 1.5 tsp salt and 5 tbsp good quality olive oil. Blend for 3-5 minutes until smooth and chill for at least 3 hours before serving. Traditionally salmorejo is served with chopped hard-boiled egg and Spanish ham on top but still tastes good without it.