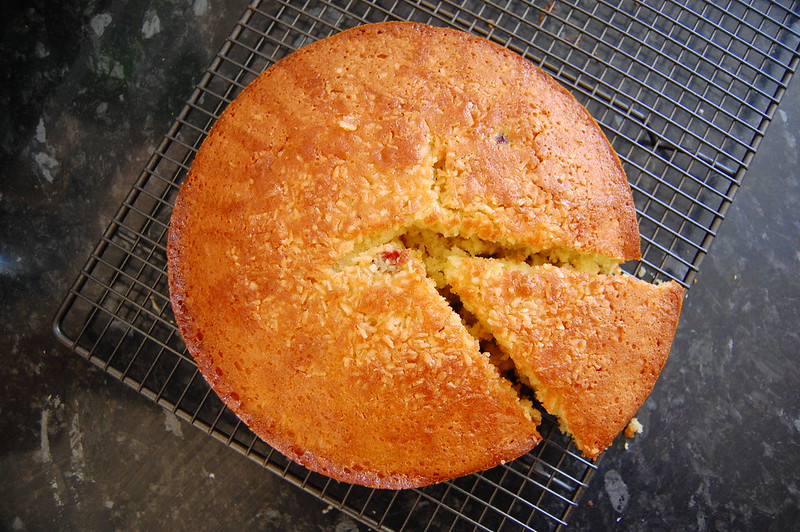 My Big Nonna (that's great grandmother) was a bit of baker. Nothing fancy or experimental, just good, old-fashioned cakes. There was always a cake on the table at her house, you could just help yourself. My standard sponge cake recipe comes from her and it's that recipe that forms the basis of this offering. A slightly odd flavour combination possibly, and certainly not something that Nonna would have come up with (or endorsed) herself but I can assure you, it most definitely works! I do have a bit of a thing for coconut at the moment, which may have slightly influenced this cake. It just seems to find its way into most of my baking at the moment and it rarely fails. Anyway... I digress! Back to this cake. I had originally intended to make lemon drizzle cake, but we had no lemons just lots and lots of limes. Lime and coconut definitely appealed but I felt it was missing something. Dried cranberries are another favourite of mine at that moment, although they don't manage to make it into quite so many bakes!

Now, on to the recipe. My Nonna was an imperial baker, none of this metric nonsense. So for her, I keep this recipe in the old money - it just wouldn't be the same otherwise! So Nonna's sponge recipe was a 4:4:4:2 formation (that is ounces of self-raising flour: caster sugar: vitalite: eggs). So to that, I added 2oz dessicated coconut, 1oz dried cranberries and zest of 2 limes. Mix thoroughly and pour into a greased tin. Bake at 180C for 30 minutes until a skewer comes out clean. While the cake is cooling, heat the juice of 2 limes with 2oz caster sugar stirring until the sugar dissolves. Drizzle this over the hot cake and leave to cool. Serve with tea.