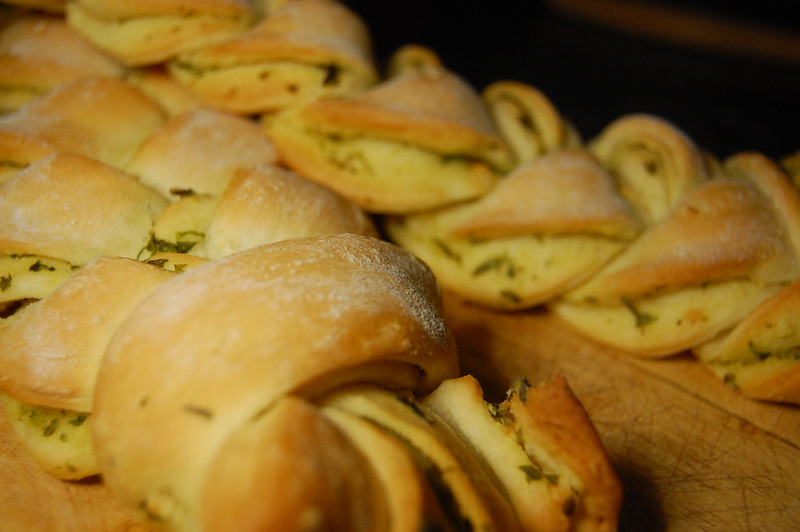 It's not often I post a bread recipe here, I make a reasonable amount of bread but tend to stick to using other people's recipes rather than making my own. But this evening I was feeling creative. I was going to make my usual garlic bread using some partbake bread but I thought I'd make my own. These were delicious, not quite as obviously garlic-y as my normal garlic bread but balanced nicely with the bread, and such super soft bread! This was my first time plaiting bread dough, in fact my first time plaiting anything apart from hair, and I was a little nervous but it's not as terrifying as it first seems!

Start with 180g strong bread flour then add in 10g sugar and 7g easy bake yeast, one teaspoon salt and a drizzle of olive oil. Mix together before adding in enough warm water to bring together into a soft dough, before kneading for 5-7 minutes. Place the dough back into the bowl, drizzle the dough with a little olive oil and cover the bowl with cling film. Leave in a warm place for 30 minutes or until doubled in size. While the dough is proving mix 75g Vitalite together with 5 crushed cloves garlic, handful chopped fresh parsley, one teaspoon dried oregano and a few fresh basil leaves, finely chopped. Once the dough has proved, divide it into two pieces. Roll each one into a rectangle about 1cm thick. Spread one piece of dough with the garlic and herb butter, and place the other on top, before gently rolling again.

Cut the dough into six equal strips, enough for two loaves. Take three strips at a time and place the top end of each strip on top of each other, then commence plaiting (there are YouTube videos which can help with this, essentially take the left strip and lay over the centre one, then take the right strip and place over the new central strip. Continue this pattern until you run out of dough). Once you've plaited, pinch the ends together and tuck the end under the plait to neaten up. Repeat with the other three dough strips then leave on a baking sheet covered with cling film. Leave to prove for a second time for around 30 minutes until roughly doubled. Bake at 190C for 30 minutes until golden.