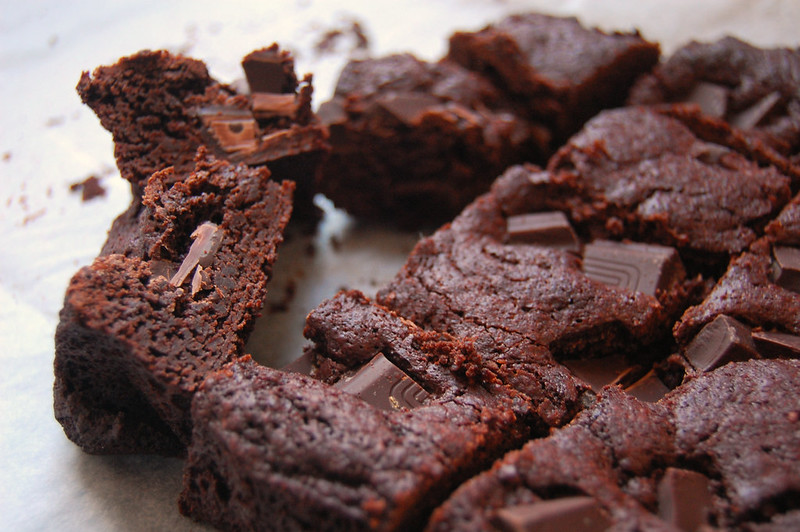 So scrolling through the recipe archive, it appears we've been quite remiss and never actually posted our brownie recipe. This has been carefully curated over many years, tweaked and perfected until we were prepared to write it down. It was the first thing to go into the special notebook of "our" recipes. Now that I remember, this is because we've struggled to take a photo of them that truly conveys just how chocolatey and how tasty they are! One day we'll manage it, but for now here's a vegan alternative that we've recently discovered.

This is based on a Jamie Oliver recipe but with one slight (dare I say it?) improvement... peanut butter. Peanut butter and chocolate has to be one of my all-time favourite combinations. The mix of salty and sweet it delightful. On an indulgent day I will use this as the topping for my porridge (on a normal day it's usually frozen berries and peanut butter, always peanut butter). I love it. And what better way to celebrate the combination than to bake it into some brownies! It lends a richness to these brownies that will leave you wondering whether they really are vegan.

So the starting point of the recipe was Jamie's but with a few additions and substitutions. Obviously, the addition of peanut butter is one. I substituted almond milk for soya milk, because I'm in the throws of a love affair with almond milk and can't keep it out of everything I'm making. I also added a few swirls of peanut butter on top and some chocolate chips. So here goes...

1. Melt the chocolate and crunchy peanut butter in a bowl over a pan of boiling water, stirring occassionally until the chocolate is completely melted. Set to one side to cool slightly.

2. Sieve the self-raising flour and cocoa powder into a bowl, stirring in the caster sugar and a pinch of salt.

3. Stir in the sunflower oil and almond milk to the dry ingredients. Add the melted chooclate mixture and mix until everything is combined.

4. Pour the mixture into a greased and lined baking tin, swirl another tablespoon or two of peanut butter on top (I used smooth this time rather than crunchy) and scatter over the chopped dark chocolate.