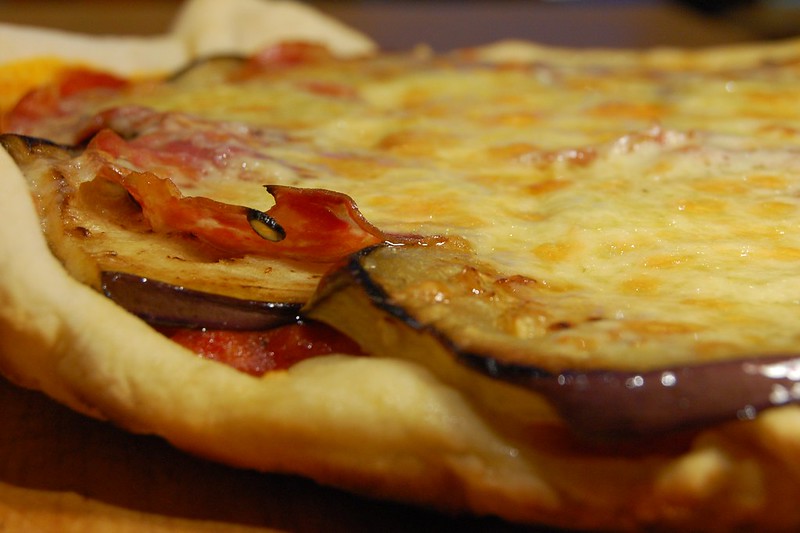 Who doesn't love pizza? Since discovering a rather exciting and slightly different method for recreating pizza-oven pizza (see our previous post for more details), we've really branched out with toppings. Our latest combination is salami and aubergine with Lactofree cheese, a definite winner as as we're concerned!

The last pizza post will give you the recipe for our pizza dough (top tip: the longer you leave it to prove, the better it gets! We usually leave it for at least 8 hours, so we'll knock up some dough before going off to work) as well as the low down on the Franco Manca, fry then grill methodology. Trust us, you'll never have had homemade pizza quite like this before. Anyway, once you've got your dough ready to go, and have made a nice light tomato sauce fry some thinly sliced aubergine (around half an aubergine will do nicely, in 8-10 slices) in a little olive oil. So, now it's down to business. Heat your frying pan and, once hot, toss in your rolled out pizza base (yes, this sounds a little crazy but bear with us, it really is amazing!). Leave the base to cook for 3-4 minutes then add the toppings; the tomato sauce, the fried aubergine slices and some thinly sliced salami (we prefer napoli salami for this, and we ask the deli counter to slice it nice and thin), then a slightly obscene amount of grated Lactofree cheese. Leave on the hob for a few more minutes and then put your pizza under a heated grill until the cheese starts to bubble. Simply outstanding!

In our last pizza post, we said we were trying to make our own mozzarella. We've not given up on this, but have not yet been successful. We've tried a couple of times but think the heavily-pasteurised milk is standing in our way. It's back to the drawing board for us, but we've not given up!